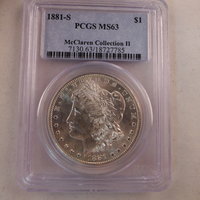 Third party coin certification was pioneered by ANACS, which was founded by the American Numismatic Association (ANA) in 1972. The Board of Governors realized the need to have a guarantee of authenticity, so they offered the first authentication service. At that time, the coins were not graded, only confirmed as genuine. Coins were returned with a photo certificate but not encapsulated.

There are four coin certification services which eBay, the largest coin marketplace, deems acceptable to include in its listings: PCGS, NGC, ANACS, and ICG. Experts consider these to be the most credible and popular services. Together they have certified over 80 million coins.

In recent years the issue of counterfeit coins has been headline news because of the flood of fake coins pouring out of China. The United States and China seem unprepared to deal with the problem. Your best protection is to purchase only certified coins from a reputable dealer. There are literally thousands of counterfeits offered online everyday.